Our Creating Healthy Schools & Communities grant works in two communities in the western New York region: the City of Niagara Falls and the City of Lackawanna. The City of Niagara Falls School District is an urban district with a municipal population just over 50,000 and the City of Lackawanna is an urban district just south of the City of Buffalo and encapsulates approximately 19,000 individuals in the catchment area. Although the populations vary, both communities have a distinct, but inherent need for a holistic and comprehensive approach to increase access to healthy food and opportunities for physical activity, ultimately to reduce the risk of obesity and chronic diseases. According to the Community Health Needs Assessment- Core Health Indicator’s Report, 71% of adult residents in both Niagara Falls and Lackawanna do not consume the recommended amount of fruits and vegetables. This is no surprise when the access to grocery stores is well below both state and national rates with 31% of census tracts in these municipalities designated “food deserts.” The built environment resembles that of many under-served communities and poses many barriers to adequate physical activity.

The Creating Healthy Schools & Communities grant program complements both the needs of the city of Niagara Falls and Lackawanna, but also the skill set of CCE Niagara. Over the past five years, CCE has been instrumental in collaboratively working with and engaging partners including the Niagara Falls City School District and the city to make changes to improve the health of the residents. CCE has worked on environmental changes such as establishing community gardens throughout the city, installing bicycle and pedestrian amenities such as bicycle racks and park benches, urban trail development and a healthy food retail initiative at corner stores.

Visit the NYS Department of Health website to learn more about the Creating Healthy Schools and Communities (CHSC) program and its goals. 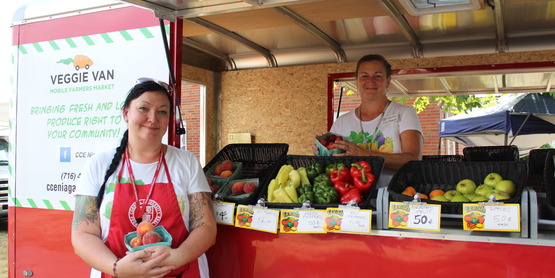 Click on the images below to connect with us on social media and stay up-to-date on CHSC's latest programs and activities!